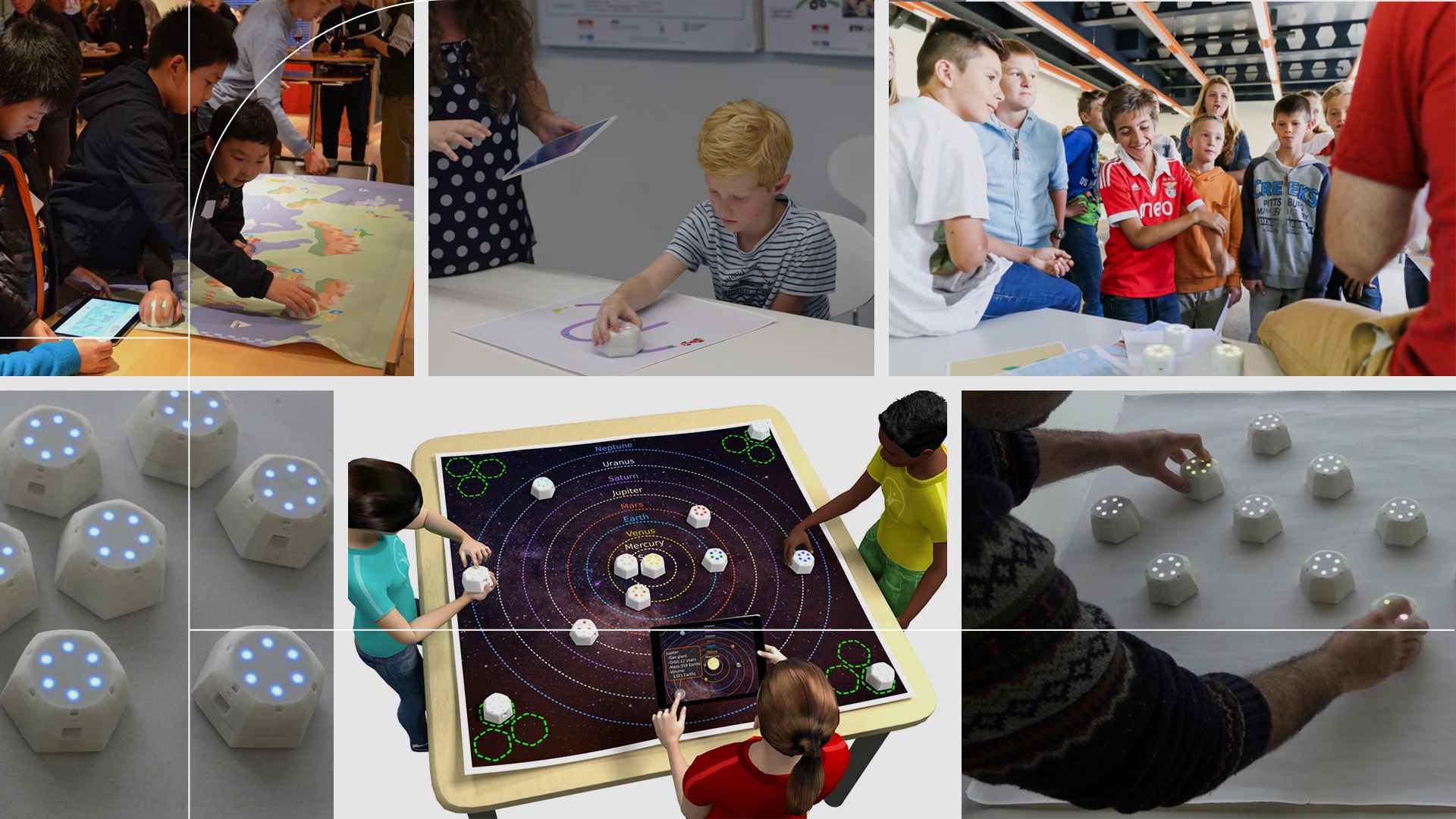 The Cellulo robots allow visualizing in a tangible manner what is intangible in learning, and mediating learning activities.

The National Centre of Competence in Research (NCCR) in Robotics is an organization funded by the Swiss National Science Foundation (SNSF) which brings together researchers from all over the country in the development of new human-centered robotic technologies with the objective of improving the quality of life.

As part of the research projects undertaken with the support of the NCCR Robotics, the teams of the Computer-Human Interaction Lab for Learning & Instruction (CHILI) and the Laboratory of Intelligent Systems (LSRO) have developed the Cellulo robot.

Between 2014 and 2018 (corresponding to the second phase of the NCCR) the Cellulo project focused on the development of a modular, manually controlled robot designed to integrate cross-curricularly into all types of teaching and subjects.

In its first iteration, Cellulo allowed for rich interactions with learners, offered a wide range of pedagogical activities, and seamlessly integrated into classrooms and universities.

This versatility paved the way for the exploration of three application areas:

Cellulo for “gamified” rehabilitation:
This project aims to provide a tool for rehabilitation that is playful, practical, easy to use and intuitive by using these tangible robots as agents and game objects.

For example, the first game developed by the research team is based on the classic Pacman and allows the design of exercises targeting arm motor skills. This game is designed iteratively with the participation of stroke, brachial plexus and cerebral palsy patients (18 in total) and seven therapists in four different therapy centers. A number of game elements are designed to adjust speed, accuracy, range of motion and level of challenge.

In 2021, with funding provided by the “Grassroot Project” facility established by the NCCR Robotics, research teams from the Computer-Human Interaction Lab for Learning & Instruction and the Reconfigurable Robotics Lab collaborated to further develop the Cellulo concept.

Leveraging the expertise of these two labs and exploiting the results collected around Cellulo, the team developed the Cellulo Modulo, a revised and improved version of its predecessor aimed at increasing its integration capacity.

This new design proposes a configuration divided into three modules: the main module containing the means of locomotion and control between the modules, a module containing the battery and finally, the module known as “user interaction” which allows the Cellulo Modulo to be paired with other tools or objects. In particular, the Cellulo-Mori allows the connection of the Modular Origami Robot (Mori) designed by the RRL to the interaction module of the Modulo Cellulo.

Within this application area, CHILI researchers are developing pedagogical activities that take advantage of the Cellulo’s capabilities. In particular, they are studying the role of tangible interactive robots in supporting letter writing for children with attention and visual-motor coordination problems.

Three features of the Cellulo robotic platform, specifically haptic information, autonomous movement, and synchronized behavior of multiple robots, allow for increased multi-sensory feedback through the letter writing process. The haptic features allow each child to receive instant individual feedback, the autonomous movement causes the robot to reproduce the layout while the synchronized behavior of the robots allows for collaborative game design.

This learning activity developed to demonstrate the potential of Cellulo in the classroom as part of standard school activities, is a so-called “semi-gamified” activity where students learn how atmospheric pressure results in winds through a robotic simulation of “hot air balloons” over Europe. There are high and low pressure points of different intensities that create outward and inward winds respectively at a certain distance; the strength of these winds decreases with the square of the distance. The wind force at a given point on the map is then calculated as the vector sum of the wind forces created by all pressure points.

This activity was developed to teach children the usefulness of a coordinate system to describe the position of an object. Through a game in groups of 3, students seek guidance to find an astronaut lost in space.